Holy Trinity was built in 1855 as the area around, still largely rural, began to be developed. The architect was Anthony Salvin. The original building consisted only of the nave, sanctuary and narrow side aisles. The tower was added a few years later.

Over the next few decades, Upper Tooting became densely built up. At the end of the 19th century the church was substantially enlarged and a separate parish hall built in Glenburnie Road. Most of the church furnishings, such as the alabaster and stone pulpit, the brass lectern, and choir stalls date from this time. One Sunday in 1895, over 3500 people worshipped at the church, the biggest congregation ever. 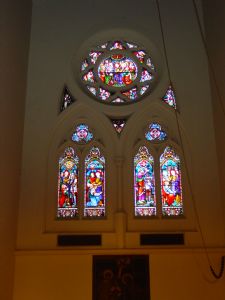 There were few changes to the building for the next seventy years, but major changes were begun in the 1970s . To raise funds to repair the crumbling tower, the parish hall had to be sold and a new hall was created from the south aisle. There was substantial modernisation in the 1980s, when the current entrance lobby, with toilets, was created and the old vestries converted into a new small hall. The glass doors, designed by Gabrielle Preedy, a congregation member, were added. These changes enabled the building to be used by a variety of community groups.

In the 21st century, we have continued to make improvements to Holy Trinity's facilities.
In the church, a new organ was installed in 2004, the heating system has been replaced, and the north aisle of the nave has been carpeted to provide a friendly gathering space.

A major development was to build a third small hall using the legacy generously left by parishioners Olga and Jack Taylor, together with refitting the kitchen and making a disabled-access toilet.  Substantial repairs to roof and stonework have also been completed with the help of a grant from the Listed Places of Worship Roof Repair Fund.

We have now recently completed major repairs to the structure and stonework of the tower (see more details on the tower project), and installed a coffee point in the north aisle of the church to improve it as a meeting area.