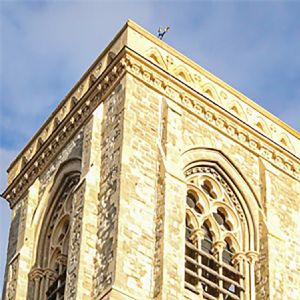 The frieze of stone flowers at the top of Holy Trinity’s tower is one of its remarkable features. Though high up, the frieze can be seen clearly from ground level. It contains two rows of flowers, one above the other.

The flowers are stylised, and it’s not possible to say exactly what they are, but those in the upper row are star shaped and resemble daffodils, while the flowers in the lower band may be based on orchids. The designs appear to be unique to Holy Trinity. They are likely to reflect the importance of market gardening in 19th century Tooting and Holy Trinity’s links with this. 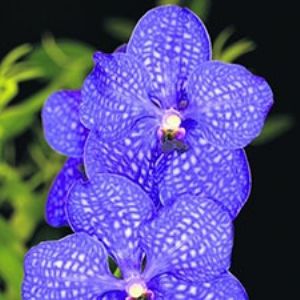 William Rollisson, who was churchwarden from 1858 to 1869, was a prosperous businessman and the owner of Rollissons’ Nurseries in Upper Tooting Road. The Nurseries catered to the rising aspirations of the middle classes to create gardens to underline their prosperity and status.

Orchids were a leading speciality of Rollissons and were a passionate enthusiasm of the Victorians.  There is no direct evidence, but it is credible to suppose that Rollisson, who was churchwarden at the time the tower was commissioned, persuaded his colleagues to include stylised orchids in the design for the tower frieze. 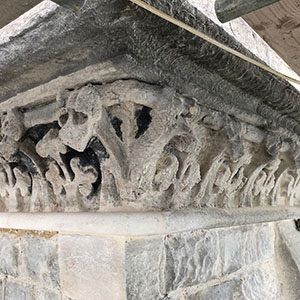 The frieze over the years

Pollution and weathering over the decades took their toll on the frieze. During the recent restoration of the tower, new carvings were put in place to replace the originals, almost all of which had decayed beyond repair. The frieze now stands out crisply and clearly for passers by to admire.

Funds were raised by inviting donors to dedicate a flower to the memory of a loved one. About 20 flowers have been so dedicated and over £16,000 raised.

Read more about the orchids and their history.