The Organ and Choir Stalls

The organ and choir stalls were installed in 1898 as part of a major programme of improvement of the east end of the church. 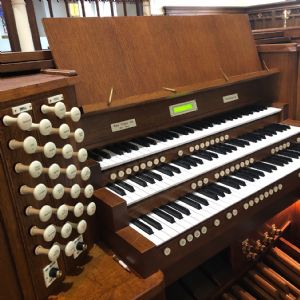 The organ replaced a much smaller one. It was a major undertaking to raise funds for the organ, which cost £1,150, equivalent to about £130,000 today. Many parishioners gave generously and further funds were raised by a public appeal. The organ was first played at a packed dedication service on 2 October 1898 led by the Bishop of Rochester. Its tone and quality were much admired.

The organ was supplied by the renowned organ building firm, Messrs Beale and Thynne. Its pipes and works were complicated and occupied a large area behind the wall behind the organ which now serves as the stage to the main hall. The organ piping contains 30,000 pieces and over two miles of tubing. Air to activate the organ was supplied by a bellows system housed in a separate structure (the blower house). This was operated manually by the organ blower operator, a church employee who needed a lot of stamina and strength to keep a good flow of air going.  In the 20th century, an electric motor took over the task. 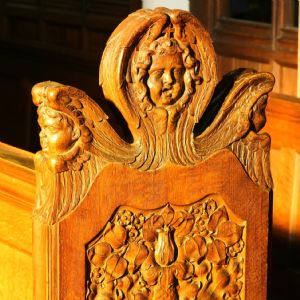 The choir stalls were installed at the same time as the organ. They were given in memory of Christopher Rapier, who as churchwarden played a major role in planning the east end improvements. His widow contributed much of the cost of £300.

The choir stalls are elaborately carved, and as with most of the church’s fittings reflect the return to medieval designs and styles inspired by the Gothic revival of the mid 19th century. The cherub’s head design at the end of each row of seating is particularly striking. No record has been found of who designed and supplied the choir stalls.

Read about the history of the organ here and church wood carving here.