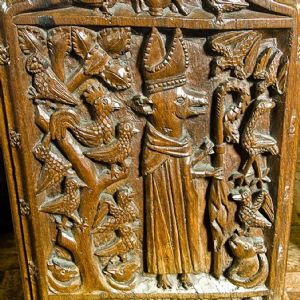 Wood carving is probably the most ancient of all art forms and is found in all cultures. While little remains before mediaeval times, there are 5th century Christian carvings in Rome. The medieval era was a time of great flowering of wood carving: choir stalls, rood screens, altars, misericords and roofs are among the glories of Europe’s churches and cathedrals. Though it's hard to imagine it now, wood carvings were painted in bright colours.

Unlike many other Gothic art forms, wood carving continued to flourish after the Reformation. Classical and baroque churches such as St Pauls Cathedral gave pride of place masters such as Grinling Gibbons, whose carvings make lavish use of classical motifs such as cherubs, fruits and swags, in contrast to the more natural forms of medieval times. 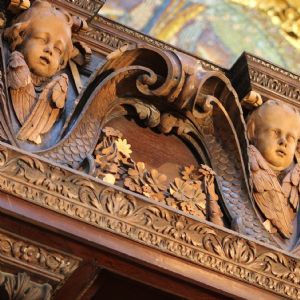 In Victorian times, the leading architects of the Gothic revival such as Pugin, Barry and Benjamin Ferrey, who designed Holy Trinity, designed many fine wood carvings in their work  for churches. However, the majority of carved wooden items in 19th century churches were mass produced and lack fine quality. Pugin coined the phrase ‘Brumagen Gothic’ to describe the superficial repetition of medieval motifs.