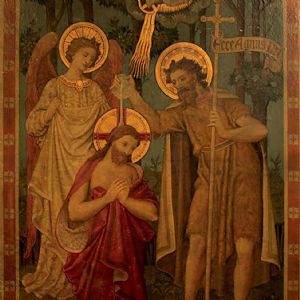 The Baptism of Christ

The wall paintings were painted between 1907 and 1913, and were the inspiration of Rev W B Lindesay, who became vicar in 1906. His vision was to transform the then plain church into a place of colour and beauty. They are among Holy Trinity’s most distinctive features.

All the paintings were painted by Richard Castle, a Holy Trinity choir member and are the only known examples of his work. Little is known about him, though he was evidently an accomplished artist.  They are oil paintings.  They reflect the Victorian romantic style of narrative painting, with its use of flowing draperies and medieval settings. 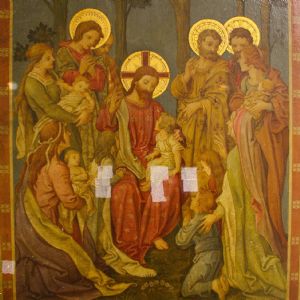 Christ and the children

The paintings depict Biblical scenes and saints. Those in the baptistry were painted in 1907 and show scenes from the life of Jesus. They are thought to have helped teach children gospel themes. Several more were painted in the chapel and the chancel during 1912-13, but only one remains, St Agnes. This is described as the gift of the children of Holy Trinity. A sixth painting, of St Oswald, the Saxon king of Northumbria, was given in 1913 by the men of the parish.

Over the years, the paintings have deteriorated as a result of damp in the church walls.  Art conservation experts have applied emergency protection, but it was necessary to eliminate the damp before work could start on restoring the paintings. This has now been achieved through the tower restoration project, and plans are in place to undertake the work soon. 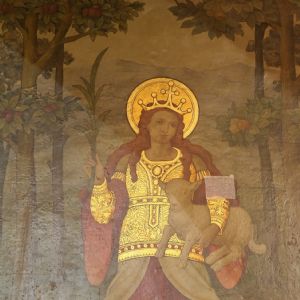 At the same time as the wall paintings, some walls in the east end of Holy Trinity were painted at this time with flowing flower and lettering decoration in Gothic style reminiscent of Pugin. These were painted over in the 1950s to reflect the simper tastes of the day.

Fuller notes on the paintings are given here and on the history of church wall painting here.