The paintings emphasise themes important in the life of the church at the time. 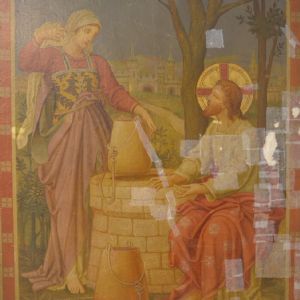 The Samaritan woman at the well

The paintings in the baptistry are titled  ‘The Baptism of Christ’, ‘The Samaritan woman at the well’ (as told in St John’s gospel) and ‘Christ and the children’. The baptistry was used as a children’s area, and it is likely that the wall paintings were used as teaching aids. The painting of Christ surrounded by children tenderly evokes his loving welcome for them, while the other two show the importance of baptism in the Christian journey and of Jesus as the ‘living water’. 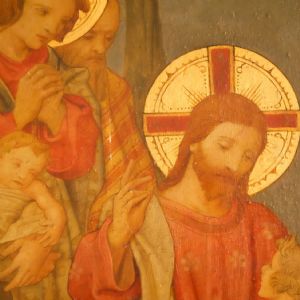 Christ and the children

The theme of nurturing children is continued in the painting of St Agnes, which was given by the children of the church. St Agnes, who was martyred as a girl, carries a lamb, signifying care for the young. Holy Trinity served large numbers of children, both through its Sunday schools and activities such as outings, and through its flourishing junior school in Trinity Road. 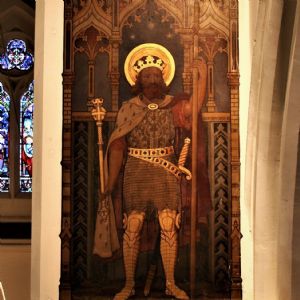 The painting of St Oswald, which was given by the men of the parish, emphasises values of manliness and courage. Men had a strong presence in church life, not just in formal leadership but in the church’s social and charitable activities as a whole.

St Oswald was a 7th century warrior king of Northumbria who strove to implant Christianity. He was adopted as the patron saint of the Church of England Men’s Society (est 1899) of which a branch was founded at Holy Trinity in 1906. The inscription below the painting includes the phrase “Be strong and play the man”. These are said to be words uttered by Polycarp, a 1stcentury bishop, as he was being martyred by fire.