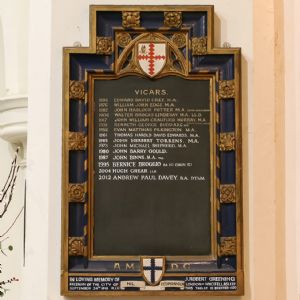 The Vicars’ Tablet was erected in 1920 on the east wall of the baptistry to record the names of Holy Trinity’s vicars since its beginnings in 1855. It was the gift of Miss H. Greening in memory of her father, a freeman of the City of London and a parishioner.

Holy Trinity’s early vicars were people of strong energy and vision, who inspired the enlargement and improvement of the building in the late 19th and early 20th centuries. Read about them here.

The tablet shows the influence of the late 19th century, with its emphasis on the colour and vigour of traditional English vernacular design.  In particular, it reflects the trends of the 1920s to introduce colour and varied materials into wall monuments in churches, in contrast to the plan white or grey marble used in most 18th and 19th century wall tablets. It is not known who designed it. For more about church wall monuments see here. 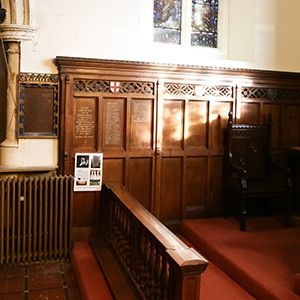 The memorial was designed by the architect Harold C King and built by the firm A Robinson at a cost of about £350. 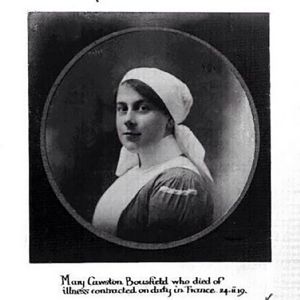 Unusually, the names include one woman, Mary Bousfield, who served as a nurse in France in the Voluntary Aid Detachment (VAD), the women’s nursing corps. She died of illness in France in 1919. She was mentioned in despatches and was undoubtedly a heroine. The Bousfield family were closely involved in the life of the church, and the candlesticks in the chapel were donated in Mary’s memory in March 1920.