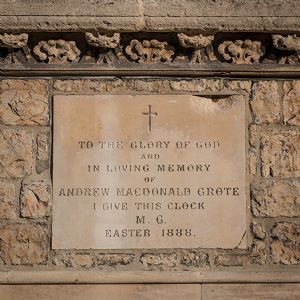 Holy Trinity’s clock was installed in 1888. It was the gift of Mrs Maria Grote in memory of her late husband, Captain Andrew Macdonald Grote, a prosperous parishioner. Captain Grote (1837-71) served in the Indian Army as a young man before coming to live in Tooting in 1871 to join the family bank, Prescott, Grote, Culverden & Hollingsworth. He came from a family with a long tradition of public service.

Church clocks have played an important role for centuries in keeping time for communities. Created to summon people to services, they were for a long time the only timekeeping device in most villages and towns. Holy Trinity’s clock is a good example of a Victorian ‘turrett clock’. Read more about the history of church clocks  here. 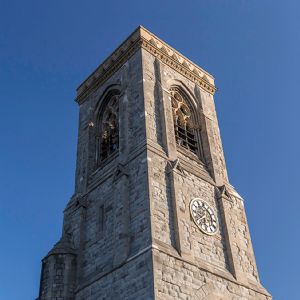 The clock mechanism is on a landing half way up the tower. For over a hundred years, the clock was wound every week by a congregation member and kept good time. Over the years however, wear and tear took their toll. The clock ceased to chime around the turn of the century and tended to go fast or slow.

The clock was fully restored as part of the restoration of the tower in 2019/20.  The mechanism was overhauled and the face and hand have been reglazed and regilded. The clock now tells accurate time and chimes on the hour and half hour. Read more here.

Visible from a long distance, the restored clock makes a much appreciated contribution to Tooting Bec’s heritage and townscape.