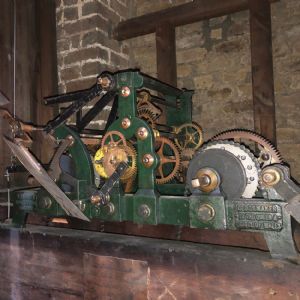 Holy Trinity’s clock is a good example of a Victorian ‘turret clock’. It was manufactured by J. W. Benson Ltd of Ludgate Hill. The clock is housed on a platform in the landing at the top of the tower’s stone spiral staircase. Wooden doors open to show the mechanism, including the wooden pendulum and the elaborate system of gears and cogs.

For over a hundred years, the clock was wound every week by a congregation member. This was a skilled job, involving not only winding but also adjusting the timing mechanism so that the clock kept accurate time. Clocks have a tendency go fast or slow for a range of reasons, especially contraction or expansion of the pendulum in response to the weather. Unfortunately, the installation of an electric winding mechanism in the 1990s wrought havoc with accuracy and the clock was much less reliable than before! Sadly, the clock ceased to chime around the turn of the century as the years took their toll on the striking mechanism. 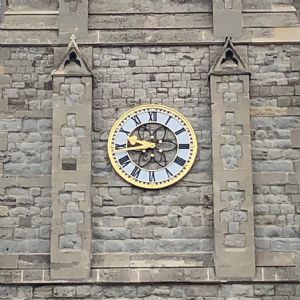 The clock has now been restored to its previous splendid state. As well as a thorough overhaul of the mechanism, the face has been reglazed, the hands regilded, and the ‘chapter ring’ round the dial has repainted in the original colours. Correct time is assured through the ‘regulator’ that picks up radio signals from the ‘national clock’ and makes frequent adjustments. The clock now chimes on the hour and half hour.