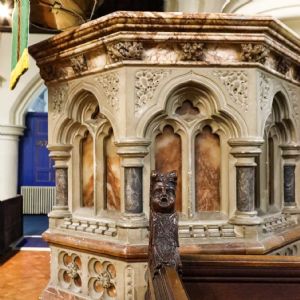 Holy Trinity’s pulpit was donated in 1889 by a generous church member. It is typical of the many gifts of furniture and fittings from parishioners in the late 19th century, among them the lectern and many of the stained glass windows. Made of stone and alabaster, it was given by John Ansted in memory of his father who was a churchwarden.

Role of the pulpit 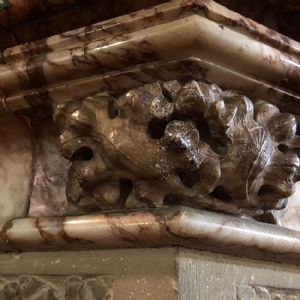 The pulpit is the place in church from where preaching is done. Traditionally, the pulpit is a raised structure so that the preacher can be easily heard and seen.

Holy Trinity’s pulpit is made of stone, marble and alabaster in a colour scheme of deep red and grey. It is typical of the Victorian Gothic style of pulpit which sought to imitate medieval models. It has carvings in geometric patterns and ornamental leaf forms. 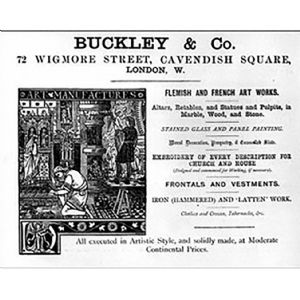 The designer of the pulpit is unknown. It may have been provided by one of the church furnishing companies that sprang up in response to the massive expansion of church building in the mid and late 19th century as the population grew and moved to towns. These companies could supply everything a church needed from the smallest items to pulpits, choir stall and fonts. Many existing churches re-equipped themselves with fittings in medieval styles.

A fuller description is given here.