The pulpit in history 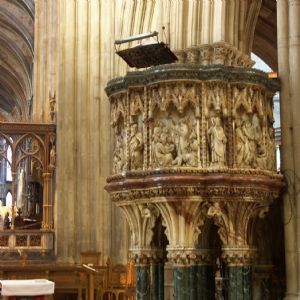 The pulpit is of ancient origin and important in all Christian traditions. It assumed its traditional form in the 14th century. The origin of the word is the Latin pulpitum (platform or staging). Read more about the evolution of the pulpit and their conservation. 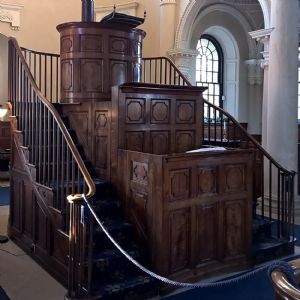 Pulpit design changed little until the 18th century, when a much plainer style of pulpit, sometimes located in the centre of the church, came in.

From the 1840s on, however, the Victorian Gothic movement led to the revival of pulpits in medieval styles.

Features of the pulpit 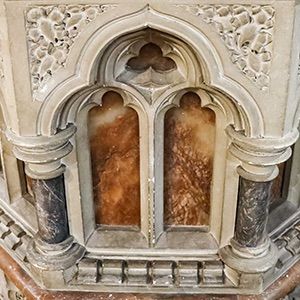 Holy Trinity’s pulpit is based on medieval designs. The designer and supplier are unknown.

The new pulpit replaced the previous wooden ‘temporary’ pulpit installed around 1856. It was originally positioned on the right side of the chancel but appears to have been moved to its current position on the left when a new organ was installed in 1897. 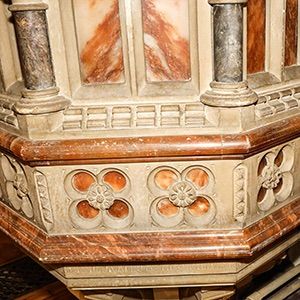 The pulpit rests on a plinth with steps leading up to it. The steps are not part of the pulpit itself, though their style has echoes of traditional designs.

The pulpit may have been provided by a church furnishing company. These companies could supply everything a church needed from the smallest items such as paper goods and small fabric items to pulpits, choir stall and fonts. The biggest suppliers had teams of up to 300 workmen and designers. In the 1880s there were over 40 suppliers in London alone. However, numbers shrank in the early 20th century as the great burst of building came to an end, and churches mostly found themselves fully equipped. Today only two major suppliers remain. More information here.