History of the lectern 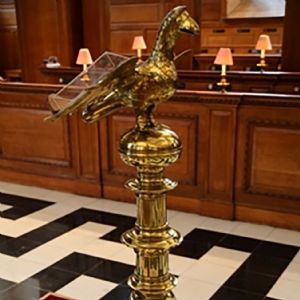 The  lectern is the stand on which the Bible rests, and from where readings are read during the service. It is set in front of the pews, so that the reader or speaker faces the congregation. It carries on the ancient Jewish tradition of the ‘bimah’, the raised area in a synagogue, from where the Torah is read.

Eagle lecterns came into use in the late 15th and early 16th century, though many were destroyed in the Reformation, in particular because they were associated with idolatry stemming from the eagle’s role as ‘king of heaven’. In pre-Christian times the eagle was a symbol of the sun, signifying victory, pride and royalty. It has been used many times as an emblem of empire, for example for the Austro-Hungarian empire. 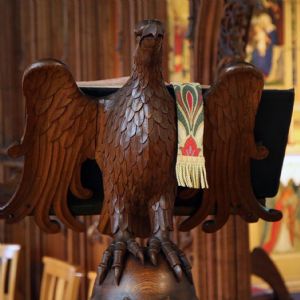 Eagle lecterns began to be used in English churches on a large scale from the 1840s as part of the Gothic revival in church architecture, with its emphasis on reviving the designs and practices of the medieval church. The development of brassfounding and other industrial techniques in the 1830s allowed lecterns to be produced easily in large numbers in a way not possible before.