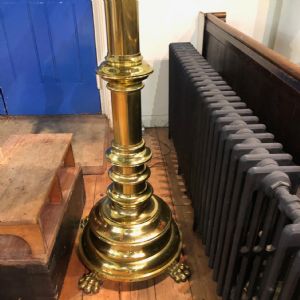 Holy Trinity’s lectern is typical of the late 19th century and is faithful to the style of medieval lecterns. The eagle’s head points skyward, symbolising heavenly aspirations. The eagle rests on a sphere and its wings are outstretched to form the reading desk. The wings are closely patterned with feathers. The sphere stands on a column adorned with geometrical shapes. The base is supported by feet resembling lions’ feet. 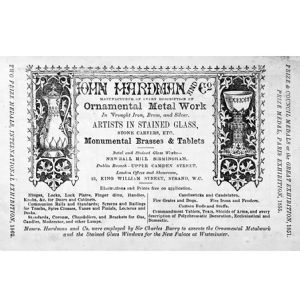 There are no records of the designer of Holy Trinity’s lectern, but it appears to be a good example of the industrially produced fittings that were supplied in large numbers in the 19th century by specialist companies. These companies flourished in response to the huge demand for fittings in the Gothic revival style that dominated C19 Victorian architecture. These suppliers were ‘one stop shops’ able to supply every kind of furnishing for the numerous new churches built to meet the needs of the surging population. John Hardman & Co and Hart and Peard & Co were notable suppliers of metalwork fittings.