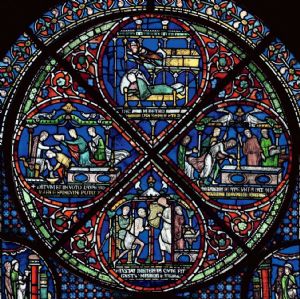 Stained glass windows were a traditional feature of medieval churches, and conveyed Christian teaching and Bible stories to an illiterate population. Small panes of glass in brilliant colours encased in lead surrounds created a jewel like effect. Few survived however the destruction of the Reformation. In following centuries, stained glass fell out of fashion in favour of plain glass or of windows painted in pictorial style in tune with the art of the day.

The Victorian Gothic revival however led to a resurgence of interest in medieval art and culture, and from the 1840s stained glass on medieval lines became the dominant style. As the century progressed, new tastes emerged. The ‘Munich style’ which combined a more painterly approach to faces and figures with traditional stained glass and leadwork, became very popular from the 1860s on. The 20th century brought in a more realistic, less idealised depiction of scenes and figures but also a move towards a more symbolic type of art. Click here for a fuller account. 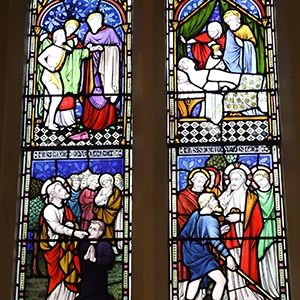 All these styles are well represented at Holy Trinity. Several windows exemplify the pure medieval style, in particular those in the North Aisle  commemorating three parishioners who died around 1860 and one in the north wall of side chapel in memory of Harriet Katherine Cree, the niece of Holy Trinity’s first incumbent. Similarly, the large west window and rose show brilliant medieval hues. 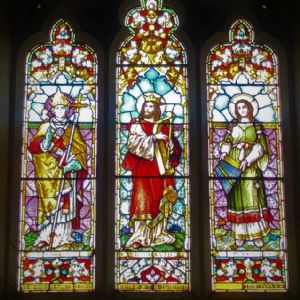 The ‘musicians’ window’ high up in the west wall of the north aisle is a fine example of the Munich style. Added in 1888, it shows David, St Gregory and St Cecilia. The windows in the east wall next to the pulpit depicting St Peter and St Paul also reflect the flowing painterly approach. 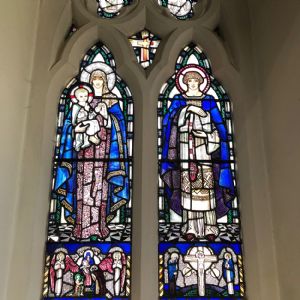 In contrast, the modern east window in the chancel is plain and severe. Designed by Harry Warren Wilson, it has the transfiguration of Christ as its theme. It was installed in the 1951 to replace the previous window destroyed by bomb damage in 1944. Even more severe and angular is a window in the chapel designed by Harry Clarke in 1922, which depicts Christ with a piercing gaze. Both were distinguished artists.